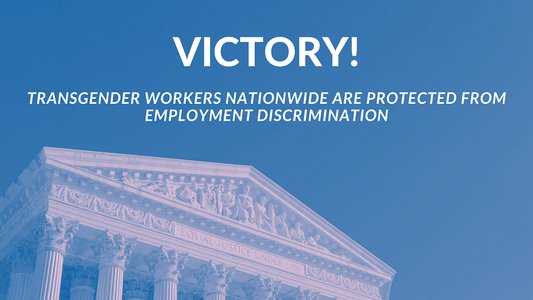 (NEW YORK, NY - June 15, 2020) Transgender Legal Defense & Education Fund (TLDEF) hailed today’s landmark Supreme Court ruling that transgender people cannot be fired for who they are. In a 6-to-3 ruling, the justices issued a sweeping decision that affirms federal law protects transgender and non-binary as well as lesbian, gay, and bisexual workers under Title VII of the Civil Rights Act of 1964, rejecting the federal administration’s attempts to roll back employment protections.

The ruling comes in three cases involving: the late Aimee Stephens who was fired from her job at a Michigan funeral home for being transgender (R.G. & G.R. Harris Funeral Homes v. Equal Employment Opportunity Commission) and two people who were fired on the basis of their sexual orientation, a skydiving instructor in New York and a child welfare coordinator in Georgia (Altitude Express Inc. v. Zarda and Bostock v. Clayton County, Georgia).

The opinion was written by Justice Gorsuch and joined by Chief Justice Roberts, Justice Ginsburg, Justice Breyer, Justice Sotomayor, and Justice Kagan. It straightforwardly states, “no ambiguity exists about how Title VII’s terms apply to the facts before us.” “By discriminating against transgender persons, the employer unavoidably discriminates against persons with one sex identified at birth and another today.” Rejecting the defendants’ main argument that transgender people were not thought to be protected in 1964 when Title VII was written, the opinion concludes, “[b]ut to refuse enforcement just . . . because the parties before us happened to be unpopular at the time of the law’s passage, . . . would tilt the scales of justice in favor of the strong or popular and neglect the promise that all persons are entitled to the benefit of the law’s terms.”

Nevertheless, in 25 states, there remain no explicit statewide laws that protect people from discrimination on the basis of gender identity. Today’s ruling means federal law now provides similar workplace protections for transgender people throughout the rest of the country. However, there are no federal laws that explicitly protect people from discrimination in housing, and public accommodations on the basis of gender identity or sexual orientation.

In the matter of Aimee Stephens, TLDEF filed a “friend of the court” brief with 33 local and state-based transgender organizations from every region of the United States that directly serve the transgender community, particularly those most vulnerable to discrimination. The amicus brief was led by TLDEF in partnership with pro bono counsel Cleary Gottlieb Steen & Hamilton LLP, a preeminent global law firm with offices on four continents.

TLDEF is committed to ending discrimination based upon gender identity and expression and to achieving equality for transgender people through public education, test-case litigation, direct legal services, and public policy efforts. Please support TLDEF today to help us transform the legal landscape for transgender and non-binary people nationwide. To learn more about TLDEF’s work, visit tldef.org.

Victory! North Carolina's Transgender Employees and Family Members to Have Their Day in Court