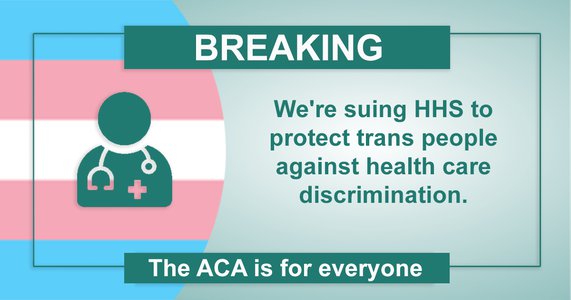 The lawsuit is filed on behalf of plaintiffs Darren Lazor, The Boston Alliance of Gay, Lesbian, Bisexual and Transgender Youth (BAGLY), Callen-Lorde Community Health Center, Campaign for Southern Equality, Equality California, Fenway Health, and Transgender Emergency Fund. Lazor, 35, is a transgender man near Cleveland, Ohio, who experienced numerous counts of discrimination from health care providers on the basis of his gender identity from 2012 to 2017. He is a member of Equality California.

The lawsuit asserts that the new rule violates the Administrative Procedure Act by being contrary to law and arbitrary and capricious. Notably, it was published on June 19, just days after the June 15, 2020 U.S. Supreme Court ruling in Bostock v. Clayton County, which found that it is unlawful sex discrimination to fire employees based on sexual orientation or gender identity. The lawsuit also asserts that the new rule will embolden discrimination and harm LGBTQ+ patients and people seeking reproductive health care, further stigmatize abortion and other pregnancy-related care, harm patients with limited-English proficiency, especially immigrants, and harm people with chronic illnesses, including those living with HIV. The rule will also create confusion about the scope of protections against discrimination under federal law.

Trans people, like plaintiff Darren Lazor, already face disproportionate discrimination in health care settings, including mistreatment by insurers and humiliation and harassment by doctors – problems that are exacerbated for Black and Latinx trans people, and trans people living in rural regions and the U.S. South. In seeking to deny trans people access to the health care they need, the Trump Administration is putting trans people, and especially Black trans women, in danger through deliberately harmful governmental action.

"I have experienced feeling like a doctor doesn't care if I live or die — which is just shameful," said Darren Lazor. "No one should be denied life-saving health care or be discriminated against the way I have simply because of who they are. I hope that sharing my story can help others understand that transgender people are who we are, and we deserve to be treated fairly under the law.”

“The abhorrent changes by HHS are yet another illegal attempt by the current administration to further endanger the lives of transgender people, especially Black transgender women who face the greatest challenges with accessing health care. Today, with our partners and plaintiffs, TLDEF is challenging these regulations to ensure that explicit health care protections for transgender people remain intact, especially during a pandemic that is placing the lives of those most pushed to the margins at severe risk. We look forward to seeing HHS in court.”

We're proud to bring this lawsuit, along with our allies, to make sure that everyone can access the health care they need without fear of discrimination.

TLDEF is committed to ending discrimination based upon gender identity and expression and to achieving equality for transgender people through public education, test-case litigation, direct legal services, and public policy efforts. Please support TLDEF today to help us transform the legal landscape for transgender and non-binary people nationwide. To learn more about how you can support TLDEF’s work, visit tldef.org.