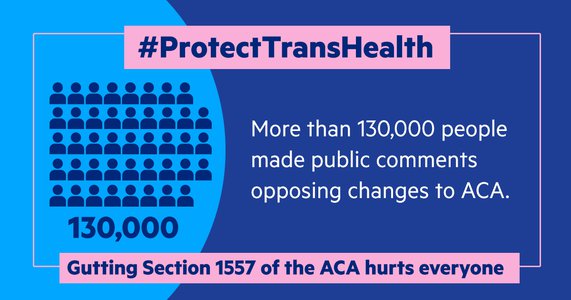 (NEW YORK, NY - June 12, 2020) Today, the United States Department of Health and Human Services (HHS) issued a new rule that would invite insurance companies, hospitals, and health care professionals to illegally deny transgender people care despite protections mandated by the Affordable Care Act. The published rule reflects a lengthy effort by HHS to chip away at non-discrimination protections for transgender people. Although today’s rulemaking does not change the statutory protections of the Affordable Care Act itself, it threatens to mislead healthcare providers into thinking discrimination is legal. It will encourage unlawful discrimination and is an invitation to litigation.

“It is particularly brazen of Secretary of Health and Human Services Alex Azar and the President to undermine health care access at a time when the nation is confronted by the coronavirus,” said Andy Marra, Executive Director of the Transgender Legal Defense & Education Fund. “Today’s published rule demonstrates this administration would rather promote discrimination in health care than deliver a comprehensive and evidence-based response to the pandemic. We look forward to challenging these reckless regulations alongside our partners to ensure trans protections remain intact.”

In addition, the rule seeks to weaken protections for people seeking abortion care or other reproductive health care. It also eliminates mechanisms for protection against discrimination, such as the requirement that health plans maintain a civil rights officer to receive complaints of discrimination.

The Transgender Legal Defense & Education Fund, Transgender Law Center, Harvard Center for Health Law and Policy Innovation (CHLPI), and the National Women’s Law Center have teamed up to challenge this rule and we will do everything in our power to prevent it from taking effect.

In 2019, TLDEF submitted public comments in opposition to the proposed rule. Earlier this month, TLDEF met with officials at the U.S. Office of Management and Budget to fully outline the broad and harmful impact such a change to the non-discrimination provision of the Affordable Care Act would have on transgender people and other at-risk communities.