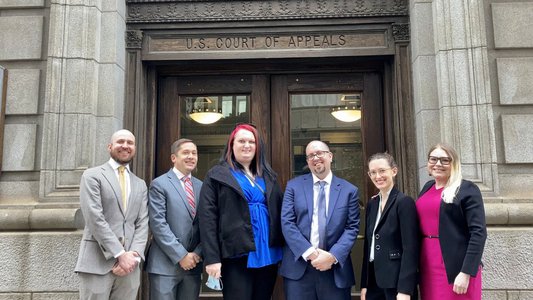 (ATLANTA, GA — March 15, 2022) A federal appeals court has for the first time heard arguments in a case involving accurate gender markers on IDs for transgender people. In 2021, a federal appeals court ruled it was unconstitutional for the Alabama Law Enforcement Agency (ALEA) to deny three transgender women — Darcy Corbitt, Destiny Clark, and an unnamed plaintiff — accurate IDs because of a requirement to provide proof of specific medical interventions.

“I know who I am. Transgender people know who we are, that’s not the issue,” said plaintiff Clark (she/her), a health care worker from Birmingham. “The issue is getting the state to recognize our existence and just let us live without intruding into our private, medical records.”

The plaintiffs in this case obtained accurate IDs following the court’s decision last year. The state has said they would rescind accurate licenses if the appeals court overturns the lower court decision.

“Transgender and non-binary people in Alabama and states across the country are being put in a double bind: it is impossible to get gender-affirming care, but surgery ‘proving’ their gender is required for them to get the identification documents they need to live their lives,” said Gabriel Arkles, senior counsel at Transgender Legal Defense and Education Fund (TLDEF) who argued today’s case. “What the state is in effect doing is criminalizing being trans.”

While not all transgender people want or need surgery, it can often be inaccessible or unaffordable to those that do. According to the 2015 U.S. Transgender Survey, only 25% of transgender and gender non-conforming people reported having undergone medical procedures similar to what Alabama is requiring. The same survey found that one in four transgender respondents who had presented an identity document that did not reflect their gender presentation were verbally harassed, one in six were denied service and one in fifty, physically attacked.

“After my out-of-state license expired, I had to rely on friends and family to help me pick up groceries, get to church, and get to my job. I missed a family member's funeral because I just had no way to get there,” said Corbitt, another plaintiff in the case. “But I was not willing to lie about who God made me just to get an Alabama license that endangered and humiliated me every time I used it. I’ve always been Darcy, a woman. I was in a costume for 20 years.”

A recording of today’s argument is here.