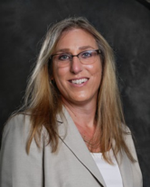 Alaina has spent the past 23 years working in the Pharmaceutical and Biotech industry.  She currently serves as a Senior Director at Gilead.  Prior to that she spent over 20 years at Pfizer.  She has experience in Market Access, Communications, Public Affairs, Sales Leadership and Sales over the course of her career.

Alaina has also been visibly active the past three years, first when she lived in North Carolinian and was one of the most visible leaders fighting HB2. She appeared in the first nationally airing transgender awareness ad supporting the right for transgender people to use the bathroom of their presenting gender, which ran during the Republican National Convention. She has also been active fighting the proposed ban on transgender military service, appearing on ABC Nightline and in numerous media outlets, along with writing an Op-Ed published in the NY Daily News. Most recently Alaina again spoke out about proposed policy changes regarding the Department of Health and Human Services in defining gender. appearing on WNYC in NYC and writing an Op-Ed published in Newsday.

Alaina currently resides in Oakland, California with her wife Kathy, and has three sons.